In the 1800’s the Dominion of Canada, as it was known, was undergoing a population boom with new immigrants flooding to her pristine shores for a better life. Unfortunately, with this population increase came an increase of untreated human waste that caused outbreaks of cholera, diphtheria, and typhoid fever in overcrowded urban tenements. Beginning in the 1870’s “sanitary reformers” including scholars, physicians and community members began advocating for waste management systems to improve both human health and economic prosperity.

Before the building of sanitation sewers, in working-class neighbourhoods, toilets consisted of community privy pits (outhouses) in the backyard, and most houses had no facilities for bathing. When an outhouse was full it was either “cleaned out”, or the outhouse moved and the pit contents covered with dirt. The “night soil” was removed under the cover of darkness by night soil men usually with carts. It was dirty, unsanitary work but well-paid for its time. Unfortunately, most of the night soil was dumped into fresh water sources contaminating local drinking water.

An early sanitary reformer was Dr. Edward Playter (1834 – 1909) a Toronto and Ottawa physician. He strongly believed in the promotion of health, and that practicing medicine included both the treatment of the sick and the prevention of sickness. He was the Founder/Editor of The Sanitary Journal, also known as the Canada Health Journal.

Sir Herbert Brown Ames (1863 – 1954), was a businessman, politician, and philanthropist from Montreal. He used much of his inherited wealth to help the poor and fight corruption. In his 1897 book, The City Below the Hill: The Slums of Montreal, he reported more than half the homes in Sainte-Anne Ward still relied on “that relic of rural conditions, that insanitary abomination, the out-of-door-pit-in-the ground privy.” His eight-year campaign against pit privies in Montreal earned him the title, “Water Closet Ames.” 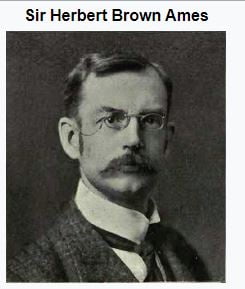 In 1951, approximately 80% of raw sewage from across Canada was discharged directly into the country’s freshwater lakes, rivers, and surrounding oceans without being treated. As of 2020, this percentage has been reversed but with 20% of raw sewage still entering our waterways, work must continue so that all Canadians, no matter where they live, have access to sanitation services.

Our Featured Photo is from 1967 Bowsman, MB – Outhouse Parade.  In celebration of Canada’s Centennial year the town burned their outhouses after being connected to a water and sewage system at a cost of $350,000 ($2.7 million in today’s dollars).